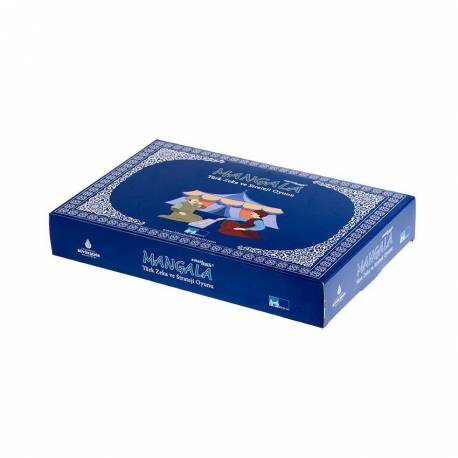 The most important feature of the game playable by people from all ages and walks is dependent on the space and materials to play the game and to be able to stay. "Mangala", collected stones from around the pit opened in the ground 6 can be played with.

The most important feature of the game playable by people from all ages and walks is dependent on the space and materials to play the game and to be able to stay. "Mangala", collected stones from around the pit opened in the ground 6 can be played with.

Different countries of the world "iMangala" type of games are played but the Turkish "mangala"other "Mangala" that makes the games so different from there are some features. Other "barbecue" the stones are usually in the type of “seed” in the name of the stones don't move, “seed absurd” is expressed as. Ziraatci shows that this is a society of those cultures. However, the "Turkish Mangala"stone “soldier” is seen as. Also to the present day “treasure” as quoted in our section on Turks “there” I mean “headquarters”, they said; that farming is not a game of our game, war game reveals.

"Turkish mangala"’s one other difference is that one of the stones to his own tent, so is being put into the pit. Other "barbecue "in the game into his own pit there is a stone drop event. "Mangala" " drop a stone into the pit of their own rule, in Turkish social life is a manifestation of the tradition of ownership to his father's home.

"MANGALA" HOW TO PLAY?

"Mangala"Turkish intelligence and strategy game played with two people. 6 different pieces on the game board to collect the pieces of each player including mutual 12 small wells and a great treasure. "Grill" the game is played with 48 stones.
Stones into each well of the 48 players, including 4 pieces and distribute. In front of each player in the game side-by-side 6 small well, that is the region of the player. 6 small well in the region of his opponent. They try to collect the most stones in treasures players. While distributing the stones to the treasures of the stone leaves the opponent players. The most stones at the end of the game the player who wins the set. With the setup of the game begins. In the kit, ending in a draw in the table of the previous set, starting with the winner of the previous trick or a new game begins. In the game there are 4 main basic rules:
1. BASIC rule: the player who wins the right to start your setup as a result of he wants in his own zone, takes 4 stones from the well. Drop one stone into a well and took counterclockwise, i.e. to the right in the hands of dropping a stone into each well of the stones until the end distributes. If the last stone falls into your hand in the treasury of the player shall have the right to play again. If you have a single stone in the well of the player in turn, you can move this to the right of the stone into the well. (More than once the last stone is thrown, the player can come into it's own Treasury) move passes to the opponent. Each time the last stone in the player's hand determines the fate of the game.
2. Rule of thumb: the player from the action while distributing the stones from their own wells have a stone in hand if the well continues to drop the stone into your opponent's zone. The last stone in the player's hand, the opponent falls in the region of an even number if the number of stones in Pit (2, 4, 6, 8) The player becomes the owner of the wells, and he puts all the stones in their own coffers. The next move passes to the opponent.
3. Rule of thumb: the stones, the last stone in the hand while distributing the player's own if the shaft falls into an empty well in his district and across the stone of the opponent in if you have empty wells and empty wells in the wells of the opponent and that takes the stones puts it into the Treasury, took the stone and left in their own. The next move passes to the opponent.
4. Rule of thumb: any of the players in the neighborhood, a stone's all set when the game ends. The first ending in the game the stones of the opponent player in your own neighborhood all the blocks in the district win. Hence, the dynamics of the game until the very last moment.
"Mangala" game is played as a set of 5.
The winner of the Game (1) points, loser (0) points and a draw of the players who finished in 1st half (0.5) it gets a score of.

17 other products in the same category: