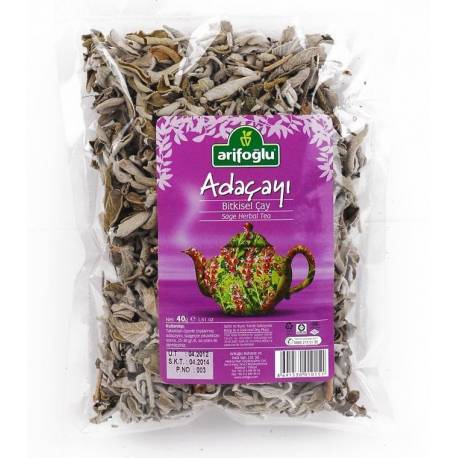 Sage has one of the longest histories of use of any culinary or medicinal herb. Ancient Egyptians used it as a fertility drug (Bown, 1995). In the first century C.E. Greek physician Dioscorides reported that the aqueous decoction of sage stopped bleeding of wounds and cleaned ulcers and sores. He also recommended sage juice in warm water for hoarseness and coughs. It was used by herbalists externally to treat sprains, swelling, ulcers, and bleeding. Internally, a tea made from sage leaves has had a long history of use to treat sore throats and coughs; often by gargling. It was also used by herbalists for rheumatism, excessive menstrual bleeding, and to dry up a mother's milk when nursing was stopped. It was particularly noted for strengthening the nervous system, improving memory, and sharpening the senses. Sage was officially listed in the United States Pharmacopoeia from 1840 to 1900.

Sage Tea or infusion of Sage is a valuable agent in the delirium of fevers and in the nervous excitement frequently accompanying brain and nervous diseases. It has a considerable reputation as a remedy, given in small and often-repeated doses. It is highly serviceable as a stimulant tonic in debility of the stomach and nervous system and weakness of digestion generally. It was for this reason that the Chinese valued it, giving it the preference to their own tea. It is considered a useful medicine in typhoid fever and beneficial in biliousness and liver complaints, kidney troubles, haemorrhage from the lungs or stomach, for colds in the head as well as sore throat, quinsy, measles, for pains in the joints, lethargy and palsy. It has been used to check excessive perspiration in phthisis cases, and is useful as an emmenagogue. A cup of the strong infusion will be found good to relieve nervous headache.

The German Commission E approved internal use for mild gastrointestinal upset and excessive sweating as well as for external use in conditions of inflamed mucous membranes of the mouth and throat. An unpublished, preliminary German study with people suffering from excessive perspiration found that either a dry leaf extract or an infusion of the leaf reduced sweating by as much as 50%.

In Germany, sage tea is also applied topically as a rinse or gargled for inflammations. Sage extract, tincture, and essential oil are all used in prepared medicines for mouth and throat and as gastrointestinal remedies in fluid (e.g., juice) and solid dosage forms (Leung and Foster, 1996; Wichtl and Bisset, 1994).

Sage has been used effectively for throat infections, dental abscesses, infected gums and mouth ulcers. The phenolic acids in Sage are particularly potent against Staphylococcus aureus. In vitro, sage oil has been shown to be effective against both Escherichia coli and Salmonella species, and against filamentous fungi and yeasts such as Candida albicans. Sage also has an astringent action due to its relatively high tannin content and can be used in the treatment of infantile diarrhoea.

Its antiseptic action is of value where there is intestinal infection. Rosmarinic acid contributes to the herb's anti-inflammatory activity.

Sage has an anti-spasmodic action which reduces tension in smooth muscle, and it can be used in a steam inhalation for asthma attacks. It is an excellent remedy for helping to remove mucous congestion in the airways and for checking or preventing secondary infection. It may be taken as a carminative to reduce griping and other symptoms of indigestion, and is also of value in the treatment of dysmenorrhoea. Its bitter component stimulates upper digestive secretions, intestinal mobility, bile flow, and pancreatic function, while the volatile oil has a carminative and stimulating effect on the digestion. It has a vermifuge action. There also seems to be a more general relaxant effect, so that the plant is suitable in the treatment of nervousness, excitability and dizziness. It helps to fortify a generally debilitated nervous system.

In 1997, the National Institute of Medical Herbalists in the United Kingdom sent out a questionnaire to its member practitioners on the clinical use and experience of sage. Of 49 respondents, 47 used sage in their practice and 45 used it particularly in prescriptions for menopause. Almost all references were to sage's application for hot flashes, night sweats, and its estrogenic effect. The age range of the menopause patients was 40 to 64, with an average of 49.76. Three-quarters were aged 47 to 52. Forty-three practitioners also noted its use in infections, mainly of the upper respiratory tract, 29 reported its use in sore throat, and 15 reported its use in mouth and gum disease, taken in the form of gargles and mouthwashes. Another main area emphasised by the respondents was its use as a general tonic, for fatigue, nervous exhaustion, immune system depletion, and poor memory and concentration, at any age. Dosage form preference was also reported. Sage was prescribed as tea (aqueous infusion) by 37 practitioners, alcoholic tincture by 30, fresh tincture by 14, alcoholic fluidextract by 2, fresh juice by 2, and fresh leaf by 1 (Beatty and Denham, 1998).

It is well documented that Sage leaf helps to reduce menopausal sweats. In one study, excessive sweating was induced by pilocarpine. The sweating was reduced when participants were given an aqueous extract of fresh Sage leaf. In a further study 40 patients were given dried aqueous extract of fresh sage (440mg) and 40 were given infusion of sage (4.5g) herb daily. Both groups of patients experienced a reduction in sweating.

Sage has a strong anti-hydrotic action, and was a traditional treatment for night sweats in tuberculosis sufferers. Its oestrogenic effects may be used to treat some cases of dysmenorrhoea and menstrual irregularity or amenorrhoea and can reduce breast-milk production.

Research has suggested that the presence of volatile oil in Sage is largely responsible for most of its therapeutic properties, especially its anti-septic, astringent and relaxing actions. Sage is also used internally in the treatment of night sweats, excessive salivation (as in Parkinson's disease), profuse perspiration (as in TB), anxiety and depression. Externally, it is used to treat insect bites, skin, throat, mouth and gum infections and vaginal discharge.

It is thought that Sage is similar to Rosemary in its ability to improve brain function and memory. In a study involving 20 healthy volunteers Sage oil caused indicated improvements in word recall and speed of attention. Meanwhile the activity of Sage and its constituents have been investigated in the search for new drugs for the treatment of Alzheimer's disease with promising results.

ESCOP (European Scientific Cooperative on Phytotherapy) indicate its use for inflammations such as stomatitis, gingivitis and pharyngitis, and hyperhidrosis (ESCOP, 1997).