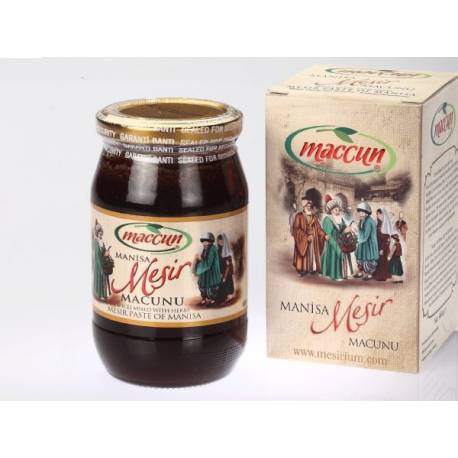 Mesir Macunu is a Turkish dessert. Mesir paste was founded as a medicine during the Ottoman period but later on it became an important part of local festivity in the city of Manisa. Below is a list of spices and herbs used in making the Mesir Paste, along with their Turkish and Latin names:

Is mesir macunu (a spicy, sweet paste), with its history of around 500 years, still made these days with the same ingredients it used to be made with? And does this mesir paste really work as a salve for a panoply of ills or is that just some legend?

Last month the 473rd International Manisa Mesir Festival took place, one of Turkey's oldest festival events. As legend has it, Yavuz Sultan Selim's wife -- or Kanuni Sultan Süleyman's mother -- Ayşe Hafsa Sultan, became ill. Doctors tried, but could not cure her illness. At last though, doctor Merkez Efendi presented Hafsa Sultan with a paste made from 41 kinds of spice. It is thus that Hafsa Sultan regained her health. After this, there began an annual celebration of this event where mesir paste was distributed to people involved in the celebrations. There was curiosity over whether this historic Ottoman treat was still made with the same spices it used to be made with. We decided to look into this question.

Modern producers of mesir paste say that they produce this treat using spices as close to the original recipes as they can find. Some of the spices used back then are no longer available, they say. Companies from Manisa which make this special paste say they work now with 35 or 38 different kinds of spice, rather than the 41 of the original paste. Ufuk Tanık, the head of the Manisa Mesir Promotion and Tourism Association, explains that he and his colleagues try to stay as faithful to the original recipes as possible: “It is simply not possible to find the same kinds of spices that were being used 500 years ago. We try to produce something as close as possible to that original recipe. It is important that there be 41 kinds of spice. We've heard of some people producing this paste using 60 or even 80 kinds of spices. But the number 41 is symbolic for Islam. We produce our mesir paste with 41 kinds of spices, keeping it close to its original state and flavor.”

There are a variety of views when it comes to whether mesir paste is good for illnesses, and whether it gives the body energy. Ahmet Maranki asserts that mesir paste is a true health elixir, noting “I do believe that mesir paste is something that we need to make sure future generations understand how to make. It contains everything in the way of spices and herbs, from ginger, so good for colds, to cinnamon, good for treating constipation. And there is saffron, which gives you a feeling of contentment, coriander, which helps whet the appetite and there is black pepper, perfect for coughs, as well as black cumin, which is used for a variety of illnesses. It also contains fennel, so good for all digestive problems, to Indian root, a treatment for bad breath. It is such a powerful paste that it truly made Kanuni Sultan Süleyman's mother, Hafsa Sultan, all better.”

In the meantime though, there are some nutrition experts and dieticians who maintain that in fact, the real energy-giving aspect of mesir paste derives not from its mixture of spices, but rather from the honey used to make it. A study done on mesir paste last year at Celal Bayar University determined that the sugar content of mesir paste hovers between 50 percent and 70 percent. Nutrition expert Ayşe Cengiz notes that any food product that contains these high levels of glucose is going to give energy to those who consume it. Dietician Ferya Bertan says that mesir paste is comparable to “pekmez” or mulberry syrup, adding, “Just as ‘pekmez' gives energy to those who consume it, so does mesir paste. The high level of carbohydrates stimulates (or eases) muscle movement.”

What ingredients are in the mesir paste of today?