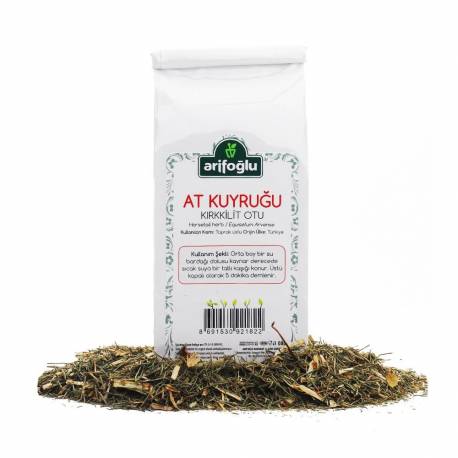 Horsetail is a member of the Equisetaceae family; the sole survivor of a line of plants going back three hundred million years. The name "horsetail", often used for the entire group, arose because the branched species somewhat resemble a horse's tail. It is a descendant of ancient plants that grew as tall as trees during the carboniferous period of prehistoric times and members of this family gave rise to many of our coal deposits. Since being recommended by the Roman physician Galen, several cultures have employed horsetail as a folk remedy for kidney and bladder troubles, arthritis, bleeding ulcers, and tuberculosis. The Chinese use it to cool fevers and as a remedy for eye inflammations such as conjunctivitis and corneal disorders, dysentery, flu, swellings and hemorrhoids.

Because of its content of silica, this plant is recommended when it is necessary for the body to repair bony tissues. Silica helps to fix calcium, so that the body can store more quantity of this mineral and then use it to repair bones, collagen and other body tissues. Horsetail can therefore be useful for osteoporosis.

Horsetail is also recommended for anemia and general debility. It has also been used to treat deep-seated lung damage such as tuberculosis or emphysema.

Horsetail is an astringent herb and has a diuretic action. It has an affinity for the urinary tract where it can be used to sooth inflammation, haemorrhaging, cystic ulceration, ulcers, cystitis and to treat infections. It is considered a specific remedy in cases of inflammation or benign enlargement of the prostate gland and is also used to quicken the removal of kidney stones.

Its toning and astringent action make it of value in the treatment of incontinence and bed-wetting in children. It may be applied to such conditions as urethritis or cystitis with haematuria, reducing haemorrhage and healing wounds thanks to the high silica content. This local astringent and anti-hemorrhagic effect explains the application of horsetail to such conditions as bleeding from the mouth, nose and vagina, its use to check diarrhoea, dysentery and bleeding from the bowel, and for slow-healing wounds, chilblains and conjunctivitis.

The horsetail constitutes one of the most diuretic species in all the plants. That is to say that it possesses a great capacity to eliminate water from the body, in such a point to increase urination up to 30% more than what is habitual. This fact makes that its scientific name Equisetum arvense generally appears in the composition of most of products that habitually are sold to reduce weight. This property is due to the action of several components, among which it is necessary to highlight equisetin and potassium, but there are another ones that also take part such as calcium, magnesium, ascorbic acid and caffeic acid.

As a diuretic it is particularly suited to metabolic or hormonal oedema during the menopause. The diuretic action is thought to be due partly to the flavonoids and saponins. Equisetum is restorative to damaged pulmonary tissue after pulmonary tuberculosis and other lung disease, as the silicic acid is said to stabilise the scar tissue.

It may be taken internally to stop bleeding from ulcers or curb heavy menstrual bleeding. It may also be used as a gargle and mouth rinse for sore throat and bleeding gums or mouth ulcers. Externally it is a vulnerary and may also be applied as a compress to fractures and sprains, wounds, sores, skin problems and a gargle for mouth and gum inflammations.

It has been established that administration of silicic acid causes leukocytosis (a temporary increase in white blood cells). Equisetin's silica content encourages the absorption and use of calcium by the body and also helps to guard against fatty deposits in the arteries. Its influence on lipid metabolism leads to potential benefit for cardiovascular problems.

Recent research in Russia has apparently demonstrated that horsetail is effective in removing lead accumulations in the body.