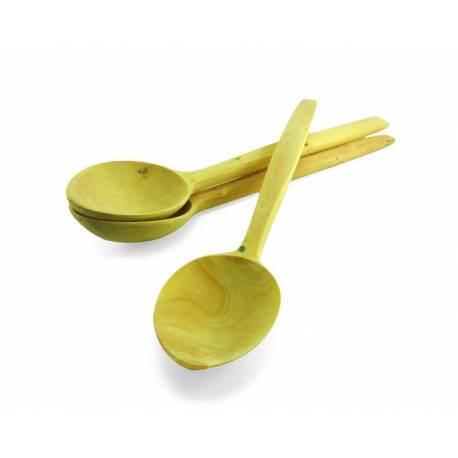 It is in pure nature. Unvarnished.

The Secret Of Grandma’s Delicious Food: The Wooden Spoon

In an era when natural products are being pushed to the forefront, our grandmothers’ wooden spoons come to the rescue. Long-neglected boxwood spoons and wooden ladles are taking to their rightful places in our kitchens once more.

Wooden spoons and ladles, which are encountered rarely even in Anatolia nowadays, are re-entering our lives. Undoubtedly, the secret of how generations before us lived longer and healthier lives lies as much as with the properties of the tools they used in their daily lives as it does with their healthier and more natural approach to nutrition. As wood was the most widely used material for kitchenware, everything from floor tables to cupboards, rolling pins, and the spoons produced in different shapes and sizes for each food were made of wood. The foods which came into contact with this natural material would preserve their nutritional value and tables would be decked in dishes that were both much more delicious and healthy. In time, however, wooden utensils fell out of predominance due to the stylish designs and attractive appearances of metal kitchenware.

RETURN TO NATURE
In truth, what makes many regional foods special besides their ingredients and the way they have been prepared is that they are made using natural kitchenware. This may be why we can’t seem to capture the taste of dishes prepared in clay pots over wood fires with wooden spoons in our integrated kitchens indoors. But the city’s modern kitchens have also discovered this secret. The most apparent indicator of this is the return of wooden spoons to our lives. Wooden spoons, which used to evoke rural living, are now among the must-haves of healthy nutrition. One must also be protected against the health problems brought by Teflon with the arrival of Teflon kitchenware in our lives. When objects coated in Teflon are scratched, the chemicals they release may lead to health problems. This is precisely where our grandmothers’ wooden spoons come to the rescue. Long-neglected boxwood spoons and wooden ladles are taking to their rightful places in our kitchens once more.

WHERE ARE THEY MADE?
Traditional wooden spoons, made from rhododendron, elm, or beech wood, are made by hand in large amounts in the Of and Yomra districts of Trabzon, the Şenpazar district of Kastamonu, the Taraklı district of Bolu and the Akseki Bademli village of Konya. They are also made in Kaş Davazlar village, Gediz, Geyve, Bolu, Mudurnu, Göynük, Seben, Kıbrısçık, Bergama, Bursa, Eskişehir, Anamur, and Silifke. The best wooden spoons are made from boxwood, which makes them sturdier and longer-lasting. In Taraklı, special workshops were built for production of wooden spoons.  Three masters work together in these places adjoining a house, called spoon house or spoon room.

HOW ARE THEY MADE?
The first phase of making a wooden spoon involves cutting the wood to the appropriate length and then shaping it into what is called a “tomsak”. During a process called “taslama” (cupping), the wood in the tomsak form is given the shape of a spoon using a hatchet. The next phase, known as “iğinmek”, involves the smoothing over of the rounded part of the spoon and the handle with a hatchet. The bowl of the spoon is formed by placing the spoon on an attachment called “kaşık tezi” and it is then carved out with a small adze.  The next process is smoothing the scoop, known as “yalaklama”, a process that entails the removal of all the marks left from the adze by using a special knife called an “iğdi”. Finally, the spoon is completely smoothed using a file, and is then sanded and polished using a piece of felt. At this point, the spoon is ready for display on the master’s shelf, not long before it may be found in a kitchen.

THE NAMES OF SPOONS
Wooden spoons have different names, depending on their purpose. Wooden spoons are generally called soup spoons, rice spoons, compote spoons, dessert or pudding spoons, coffee spoons, frying or serving (ladles), ornamental spoons, and folklore spoons.  In Turkish cuisine, the tradition of spoons dates back to the Seljuk Dynasty.  It is known that the words kaşuk and kamuç referred to in Divanu Lügati’t-Türk (Turkish Dictionary) of Mahmud al-Kashgari means spoon (kaşık) in the modern Turkish language.  In ancient times, spoons were called ablah, cemiş, and kançol in Anatolia.

Wooden spoons, which are mentioned in dozens of Turkish proverbs, and have been skillfully handled by our ancestors for centuries, are being discovered once again. Kitchens open their doors and welcome the return of this natural material for a healthier life.